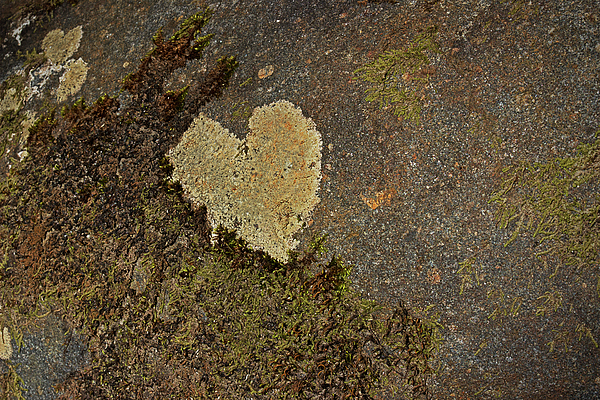 Boundary: Bleed area may not be visible.

Click and drag to re-position the image, if desired.

The image is near the edges of the product but doesn't cover the entire product.   Some of the background color may appear around the outside edges of the image.

Our ceramic coffee mugs are available in two sizes: 11 oz. and 15 oz. Each mug is dishwasher and microwave safe.

Lichen growing on the side of a rock next to a stream. It seems to have formed a very nice heart shaped design........Crustose lichens form a crust... more

Thanks so much for your nice comments and the fb placements! l/f

Thanks very much Reynold!!

Lichen growing on the side of a rock next to a stream. It seems to have formed a very nice heart shaped design........Crustose lichens form a crust that strongly adheres to the substrate (soil, rock, tree bark, etc.), making separation from the substrate impossible without destruction.[1] The basic structure of crustose lichens consists of a cortex layer, an algal layer, and a medulla. The upper cortex layer is differentiated and is usually pigmented. The algal layer lies beneath the cortex. The medulla fastens the lichen to the substrate and is made up of fungal hyphae.[2] The surface of crustose lichens is characterized by branching cracks that periodically close in response to climatic variations such as alternate wetting and drying regimes

I grew up in a small town surrounded by corn fields and farm land in Northwest Ohio. Now I live in Walland Tennessee and enjoy the beauty of The Great Smoky Mountains. My interests include landscape,nature,macro, and natural light studio set ups. Any watermarks on the images will be removed after the sale. Thanks for looking at my photos. Please contact me anytime with comments or questions. Copyright 2020-2021 Michael Eingle. All rights reserved.